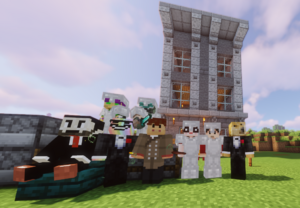 The Kingdom of Wacc, commonly shortened to simply Wacc is a nation on the server CivRev that was founded by Metriximor and Banyough on November 17th, 2021. It is in -,+ quadrant.[1]

The kingdom is surrounded on the east, north by an unnamed river, on the west and south by a large mountain chain and on the southwest by a second river, having natural borders on all sides.

Wacc itself is comprised of two main biomes, a plains biome on the west capable of producing plenty of food and providing large flat swathes of space to build settlements and a mountainous extreme hills biome on the east providing snow and naturally spawning experience.

Externally, Wacc was friends with Narra and supported it when it eventually relocated to closer to Wacc's borders.

Having one of the biggest populations on the server, the economy of the kingdom of Wacc grew to be relatively big for a start of the world nation, making all the essential factories and also a few of the more expensive and complex ones. Wacc also had an abundance of building materials that could be sourced from the biomes next to the area.

Retrieved from "https://civwiki.org/w/index.php?title=Kingdom_of_Wacc&oldid=46414"
Categories:
Cookies help us deliver our services. By using our services, you agree to our use of cookies.