The Lowtuff Liberation Army (LLA) is a clandestine rebel organization that operates against all powers who pearl Lowtuff.

It was first activated in June of 2021 after Lowtuff was pearled by ObtainableSpatula for trespassing on the vault Dovrefell. There have been rumors a full-scale assault was planned after Imperial Truidence failed to respond to an All Tomato[1]. It was supposedly cancelled after Lowtuff was released early.

It is said to be currently active after Lowtuff was again pearled, this time by Columbia, who sentenced the innocent player to an unjust 6 months exile pearl[2]. 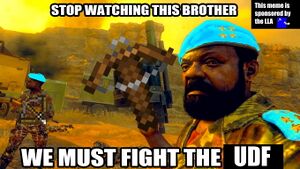 LLA Propaganda created in June 2021 to agitate against the UDF, who held Lowtuff's pearl.
Retrieved from "https://civwiki.org/w/index.php?title=Based:Lowtuff_Liberation_Army&oldid=42822"
Categories:
Cookies help us deliver our services. By using our services, you agree to our use of cookies.