The Republic of Hurtsey is a small nation on CivRev in the -,- that was founded by jeeper3 on November 17th, 2021.[1] It is a Lottocracy, where citizens are chosen randomly to represent government functions.

A few days after it was founded, Hurtsey was raided by the Wagner Group who placed a sign saying to leave or they would be raided more. It submitted itself as a colony of Fortuna after the latter state's founding on December 9th, 2021.

The citizen KShinobi attempted to rebel on December 29th, 2021. He attacked jeeper3, pearling him, and then declared independence from Fortuna. However, Fortunan citizen ChickenWingGeek assaulted Shinobi and pearled him a couple hours later, resulting in the status quo. 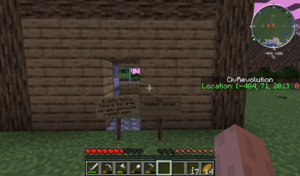 A picture of a house in Hurtsey after it was raided by the Wagner Group.
Retrieved from "https://civwiki.org/w/index.php?title=Hurtsey&oldid=46430"
Categories:
Cookies help us deliver our services. By using our services, you agree to our use of cookies.