Gul was a sparsely developed tribal nation in the jungles of the deep +,- on CivClassic, focused on a rejection of technology and traditional Civ-style gameplay and a return to a simpler existence. Accessible only by boat or on foot through dense foliage, the main settlement of Gulla sits in a deep valley surrounded by dramatic cliffs and waterfalls. Its inhabitants were known as "Monkes".

Like similar nations such as Nro'meagh, Gul rejected technology in favour of a hunter-gatherer lifestyle. Monkes were prohibited from using factories, diamond tools, armour and agriculture, and Gulla had few significant exports to other nations. Gul's independent diplomatic relations were limited, but its membership in the DUMP thrusted it to substantial political relevance.

Gul was officially founded by CheezyJives on 23rd December 2020 with a claims post in the CivClassic subreddit.[3]. Chief CheezyJives intended to create a "primitivist, ecocentric territory" where "diamond things are FORBIDDEN" and citizens could live in nature by returning to monke.[4] The first settlement was known as Brokenlake, situated on the banks of a deep lake hidden under a mountain.

Gul's borders were expanded on 24th December 2020 in a follow-up post where the capital, Gulla was also established.[5] Gulla was situated in a large, crater-like valley surrounded by large mountains and hills, and south of the initial settlement of Brokenlake.

Gul's finalized claims as of 24th December 2020, outlined in orange with its capital, Gulla, highlighted.

Not long after the founding of Gul, Chief CheezyJives was contacted by Icenian content creator Kwikxilver, who wanted to assist the fledgling nation with their entrance onto the world stage. Over a few days in late December, Kwikxilver sent an alt camera account to Gulla and produced "Return to Monkecraft",[6] a short, epic trailer chronicling Gul's founding which was warmly received by the subreddit. Unfortunately however, the difficulty of accessing Gul and the inactivity of the Christmas 2020 break resulted in Gul gaining zero new members from the promotion.

Following the video's release, CheezyJives became inactive for an extended period of time.

The conflicting borders of Gul and Veldt.

On 1st February 2021, former Hallow resident and ex-NATO fighter Camokool posted a claims post on the subreddit for a new, technology-focused, non-hostile nation called Veldt.[7] The claimed area overlapped with Gul's claims. When Chief CheezyJives responded pointing out the overclaiming, Camokool declined to recognize Gul. Camokool claimed that the land had been given to them following the NATO-Chanseatic State War and Gul was in fact, on their land. This immediately drew attention from CivClassics players across the map, who had been bored and hungry for conflict since the end of the Infinity War. With the consent of both nations, the DUMP, who Gul would join amidst the controversy, stepped in to mediate the controversy, in an effort to prevent "gorilla warfare" and other violence as a result of the conflict. However, following the revelation that Veldt had gone forward with settlement without a formal resolution, the talks spiraled, eventually resulting in the One Hour War. Following Camokool's pearling, DUMP, now firmly involved in the conflict on Gul's side, restored Gul to its original borders, to a mixed response from the wider community. 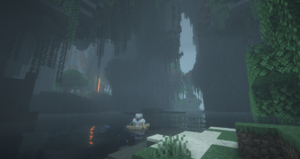 The entrance to the eponymous Brokenlake, where the first settlement of Gul was founded.

Retrieved from "https://civwiki.org/w/index.php?title=Gul&oldid=40665"
Categories:
Cookies help us deliver our services. By using our services, you agree to our use of cookies.