Lilyu warns PepsiKola95 aka Kayla about using Best Western as a Slime Farm.

The moderately sized nation of Kallos in the -,- region was attempting to acquire materials for producing Bastions, an end game item for protecting your infrastructure. One of the materials for this is Slimeballs, which were very rare unless you farmed for them in Vaults. Vaults typically contain numerous spawn chunks and will spawn slime quite abundantly. The nearest vault to Kallos that Kayla had access to was the Best Western Vault, which had been under control of the Coalition since August 2020. Assuming that the vault was essentially a museum and was open to public use, and not bothering to actually find out if this was true, Kayla decided to attempt to farm for slime there.

Kicked out the Best Western 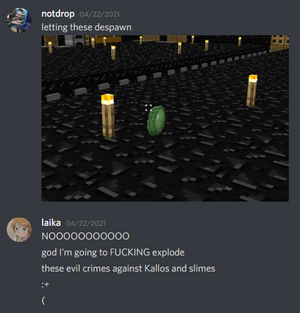 The Coalition did not appreciate having Kayla commit trespassing in the Best Western Vault. In-fact, it was very very bad. Kayla was luckily messaged by Lilyu to leave the vault immediately, as Coalition members were already mobilizing to come pearl her. Kayla only clad in Golden Boots and a Golden Helmet, alongside an Iron Chestplate and Leggings knew that this was not a fight anyone should take. She quickly left before the security arrived. This resulted in increased tension between those guarding the areas of Joint Coalition Control and Kallos. Luckily through diplomacy the situation was resolved. 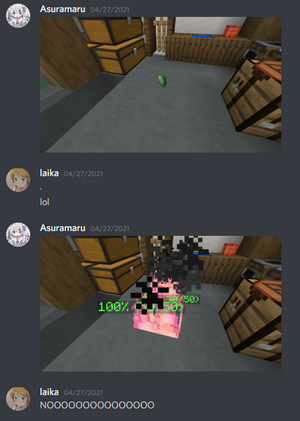 Afterwards Kallos declared that Slime and Slimeballs are sacred items and entities, that shall not be destroyed. Some players were not finished with Kayla yet however, and the nations of the UDF took to harassing slimes and sending evidence of their horrific terrorist attacks against Slimes and Slimeballs alike. This resulted in great distress from Kallos, and anger towards what Kallos considered the "WP" was built more.

Retrieved from "https://civwiki.org/w/index.php?title=Best_Western_Slime_Incident&oldid=42572"
Categories:
Cookies help us deliver our services. By using our services, you agree to our use of cookies.