The 11 Hour War was a brief, bloodless military standoff between Sussexian player gb223s13 and the NWO alliance.

The player gb223s13 was formerly an NWO member, having joined the organization shortly after establishing his new state of the Avalon Empire. However, he would give up his country to Sussex on September 10th, 2021, which resulted in his departure from the group.

In the lead-up to the standoff, gb223s13 would attempt to rejoin the organization under the claim of "North Jolington" (a reference to the various territories that were named after Jolington). The NWO was suspicious of this, as they believed granting membership to "North Jolington" would allow gb to leak internal communications to Sussex, considered a chief regional rival of several member states. Therefore, his application attempts were ignored. 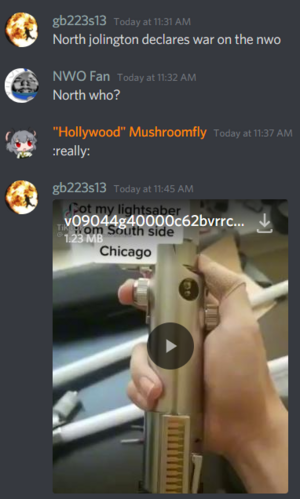 On November 6th, 2021, thirty minutes after Noon Pacific Daylight Time, gb223s13 would post a declaration of war on the NWO discord server. He would also post a threatening video minutes after, implying he was attacking in the name of Chief Keef. Little would be done at the immediate moment aside from increased monitoring of snitch networks for potential intrusions.

The standoff itself would occur at 10PM, after Mushroomfly was dispatched to the territory formerly occupied by the Pinegarden Commonwealth. The Avalon Empire had overclaimed the territory immediately after it was taken off the Unified Map Project. Noticing fresh grief, such as torn down doors, Mushroomfly decided to confront the Avalon Empire directly. Mushroomfly and gb223s13 quickly encountered each other in the center of Avalon's primary settlement. Mushroomfly grilled gb about the grief, who denied that he had caused it.

Mushroomfly noticed his opponent was carrying an unenchanted diamond sword. He issued an ultimatum: retract the declaration of war, or be pearled in self-defense. In response, gb approached Mushroomfly and clumsily attempted to logbox him, telling him to "JUMP IN MY OBBY HOLE" - this failed to trap him, only resulting in the latter player accidentally dropping a stack of Arrows from his loadout due to a hotkey accident. Noticing the resulting pile of obby looked vaguely like grief, he instead threw his last remaining obsidian block at Mushroomfly and told him to pick it up, presumably in an attempt to frame him as an obby bomber. The latter player immediately called his bluff.

Out of options, and highly likely to be turned into a prot pinata if he did not comply, gb finally withdrew his declaration of war, trying to walk back the whole incident as an elaborate jape. He then cleaned up the strewn obby off the ground. Satisfied, Mushroomfly withdrew from Avalon at 10:30 PM. Thus, the 11 Hour War came to an end.

Retrieved from "https://civwiki.org/w/index.php?title=Based:11_Hour_War&oldid=42854"
Categories:
Cookies help us deliver our services. By using our services, you agree to our use of cookies.