Valex was a corporation during Civcraft 2.0. Having achieved large profits historically under the corporate model, Valex served as a strategic consultancy firm and an investment vehicle for wider Civcraft 2.0.

Valex Corporation is centred on Remnant, its capital city in the Plus Minus quadrant. Remnant draws influences from a variety of Cyberpunk and Science-Fiction sources, such as Blade Runner, Gattaca, and TRON. Many different plots, activities, and opportunities are available for visitors and potential citizens. Other settlements under the Valex banner include Crystal Coast and Censure. Valex is also a member of the North-Eastern Alliance.

Valex was founded by a small group of refugees from SPQR amidst political turmoil. Desiring a break from the past and making the most out of the opportunity to try something new, a cyberpunk theme and corporate governance style was chosen (Draft structure can be viewed here). Since then, both old and new friends have joined the corporation and its city, which quickly developed into a thriving nation.

Jaghut, Direct of Strategy, explains Valex's current focus in an interview appearing in the Fellowship Tribune: "The last round of share issues went far beyond our expectations, and provided the financial basis for the company to keep paying dividends at their previous levels for months if necessary. However, at the same time a sharp increase in competition in materials and a sharp decrease in activity meant that continuing on as usual would only yield mediocre results. Financially, income streams from material wealth was diminishing at that time and we now had the funds and resources to differentiate ourselves - all our initial goals had been achieved, so we turned to the future. What would the Valex of tomorrow look like? How would it continue to be unique? We've significantly increased the wealth of all shareholders and built an amazing little city in the process, but what next? We made the decision then to focus on long-term projects - projects that would not merely turn a small profit, but help build a safer and more prosperous server as a whole - to enable a higher achieving Civcraft. I see the Valex of today as an investment vehicle to help enable those unique projects."

The name 'Valex' comes from a portmanteau of Valcar and Alexandria - two proposed names of a concept village to be built under the SPQR banner prior to the split.

Plans and structure were discussed only a few days before the project was started, officially beginning construction on 18th October, 2013. Some of the initial scenes of the early stages of Remnant are charted in this album. The initial challenge of starting the city was the inhospitable terrain - while extensive terraforming took place, most larger builds adapted to the steep cliffs.

Initial plans focused on constructing the base of Remnant and proving the worth of the Corporate structure - untried at Civcraft 2.0 or at such a scale at all. With initialisation of the project and design of the city helmed by CEO Logic_Man, the return of Poopdish to Civcraft led to an aggressive focus on material sales which expanded the companies profits immensely - peaking with a Market Capitalisation of over 22 thousand diamonds. This phase of Valex is charted in the Financial Statements generated in the period below:

Following this outstanding and unexpected success, Valex shifted in focus to an investment approach - seeking to use its material wealth to better Civcraft 2.0 as a whole. Whilst still conducting modest material sales, its most productive citizens now focus on individual projects - such as contributing to the Lightbarrow Cooperative. Derg, a former CEO, went on to become the Sovereign of Fellowship, while Poopdish stepped down from the leadership to enable Logic_Man to take control of Valex forward in its new era. 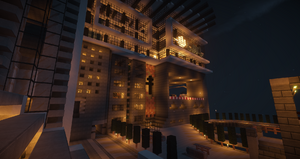 Valex's flagship, its cyberpunk-themed capital city. The city is the base of most Valex shareholders and has a variety of impressive builds. With imposing skyscrapers built into the surrounding cliffs, Remnant is highly vertical in nature.

Remnant was founded as the capital of Valex, and from the start the theme chosen was cyberpunk. This is reflected in not only its government structure, but the architecture and design of the city and its builds.

In terms of central planning, Remnant takes the name of William Gibson’s famous trilogy ‘Sprawl’ to heart. This is shown in the way the city utilises space – neat, orderly grids are avoided in favour of organic expansion from a central point.

While a futuristic theme may bring to mind a neat, orderly city, Cyberpunk reflects not just technological prowess but the decay of society as well.

The city developed naturally, with farms extending quickly over the southern island as a reflection of the demand of its citizens, with roads and infrastructure retrofitted much later to create the feel of a cohesive city.

The “create first, then smooth out the rough edges” approach echoes the way society often approaches technology, in that the advancement is achieved and implemented while the social fallout of disruptive technology is only seen in retrospect.

The nature of builds within Remnant reflects themes, particularly its corporate structure. Not only is Valex’s dominance over Remnant’s sovereignty reflected in ubiquitous signs, symbols, and outposts – but the purpose of most builds is corporate in nature. 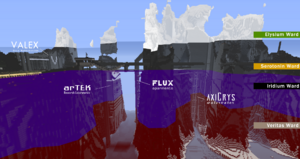 PJ Industries and Artek Research are central to Remnant, and both feature a business orientation as well as aspiring architecturally to dominate the landscape. The fact that the largest builds in Remnant are symbols of corporate power is a strong indicator of the assumed link between economic power and status.

The ‘Triple Helix’ is notable for not reflecting themes of the influence of corporate power, but of social commentary. At a basic level, the Triple Helix is a representation of a human DNA string, but with an extra strand.

The fact that the building was designed this way reflects humanity’s nature to relentlessly seek self-improvement to a perhaps unattainable ideal. The 3 strands of the Helix is a deliberate perversion of the building blocks of humankind, exemplifying the “it must be harder, better, faster, stronger.” DNA in particular was chosen to represent this idea to reflect the cyberpunk theme as well. DNA is the fundamental code governing the design of humans and the importance of code is seen in a wide variety of cyberpunk literature.

Neuromancer and its hackers, and of course ‘The Matrix’ all feature code as central to the design of the world and our experiences within it. That code can be manipulated, and improved, just as the extra strand of the Helix offers a better use of space and additional rooms within its structure.

Image of the GRID

Inspired by the imposing monolithic structures depicted in Blade Runner, the GRID serves as Valex's Colosseum and is a striking monument that has the capability to house a wide variety of events.

An exclusive collection of luxury plots in a stunning waterfront town, the in-development Crystal Coast is situated in an island bay between Remnant and Fellowship.

An agricultural focused settlement sponsored by Valex and structured as a monarchy led by King Derg, Censure is a small farming settlement north of Remnant that offers new players plenty of opportunity. Citizens can gather materials and learn the mechanics of Civcraft in a friendly and welcoming atmosphere.

Somewhat isolationist by nature, Censure is far enough from city centres to be quiet and peaceful, while not remaining too distant from trade and travel points. There are several opportunities to contribute, such as building, landscaping or helping with its famed agricultural output.

Travellers are welcome to stop by and restock their supplies, while a relaxed build code and free materials let citizens quickly set up a secure base for the beginning of their Civcraft adventures.

The town of Censure started life as a small settlement called El'Harim, founded September 2013 by Griffin777xD a dedicated newfriend who had spent the month previous travelling Civcraft.

Following sustained recruitment efforts, the town started to take shape, especially with the arrival of the then-newfriend Derg.

The town progressed quickly, obtaining factories at a fast pace, and terraforming the terrain to allow for food produce and tree farms. A notable challenge encountered however, was the frequent issue of visitors stopping and eating the hay roads of the town.

After a period of declining activity amidst the struggling leadership of Griffin, Derg took on more and more responsibility for developing the town. It was during the time that this name of the town was changed to Censure, to reflect the changing demographics of the town and its neighbours.

Following a brief power struggle, Valex Corporation installed Derg as its administrator and reformed the government to a monarchy.

Since that time, expansion of the town has seen little progress as its citizens focus on producing materials and goods for its neighbours to the south.

Both citizens and non-citizens alike own shares in Valex, which are necessary for a formal say in its governance, as they entitle the owner to vote for the CEO and on shareholder proposals, proportional to the amount of shares owned.

Valex is owned by its shareholders - there are currently 20 individual shareholders who own 2600 shares between them. Shares may be exchanged freely between citizens and non-citizens of Remnant for any reason, including profit, political reasons or as a gift - all that is required is public notification of the share transfer on the subreddit. New Shares are issued when a majority of Shareholders vote to do, and are typically put up for open auction.

The CEO, elected by shareholders, is responsible for exercising leadership, appointing directors, and is the sovereign leader of both Valex Corp and Remnant.

Directors are positions appointed by the CEO for areas of specific responsibility, such as Defence, Finance, Operations, and Strategy. Directors exercise authority within Remnant and its subsidiaries, and are representatives of the company abroad. Directors at the end of Civcraft 2.0 included Jaghut and Cat_Builder.

A view of one of Remnant's Farms

Valex is a for-profit corporation and as such works to ensure a healthy return for its shareholders as well as governing Remant effectively. Owning shares in Valex is unique as they entitle the owner to a dividend of Valex’s revenue, proportional to the amount of shares owned. Whilst some plots have an upfront cost to secure prestige areas, citizens of Remnant live tax free and are encouraged to contribute to development in whichever manner suits them best.

Thanks to the selfless efforts of a few dedicated citizens, Valex has several large farms enabling a well-fed and well-supplied population. Currently the corporation gains income from plot sales, donations, and a variety of material sales. Following a materials boom over several months, Valex has diversified into long term investments in efforts to create a sustainable competitive advantage. Drawing on the wide range of expertise of its members, Valex today offers consultancy services for developing and established states, turning Remnant into a knowledge-based economy.

Retrieved from "https://civwiki.org/w/index.php?title=Valex&oldid=38231"
Categories:
Cookies help us deliver our services. By using our services, you agree to our use of cookies.