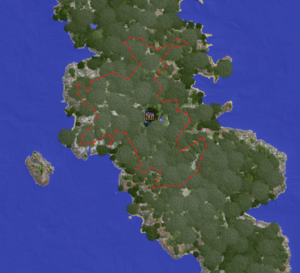 Topher Caves National Park is a nature preserve on the expansion islands of CivRealms 2.0, commonly referred to as Kingsluund or Ainahou[1], managed by Park Warden Topher3001 under the Imperial Federation. It was established the 18th of July, 2020, the same day that the expansion islands were released. The distinguishing feature of the nature preserve is the open hole that leads down to the caves. Within the caves, there are numerous rivers and lakes, and land forms referred to as 'islands' and 'arms'. The center island of the caves is covered with grass and trees, a continuation of the forest above it, which distinguishes itself from the rest of the caves. Arms extend from the island and walls of the cave, dividing the cave into numerous areas. Any visitor is allowed to explore the caves to their heart's content, but are asked to please not destroy any blocks, and if able to, to also refrain from placing blocks. There is currently no man-made lighting in the caves (so come with Gammabright!) nor bridges over the water masses (you will have to swim through them), so be extremely cautious about exploring the caves. Your death is on you.

Currently there is one gold block elevator to and from the caves, located at -27716, +5334. Future plans for the park includes placing sea lanterns in the waterways to light up the cave, along with gold block elevators behind castlegates to be placed around the cave. All questions, comments, concerns, and complaints should go to Topher3001(Acorn#1858) or gordona22(gordona22#3240). 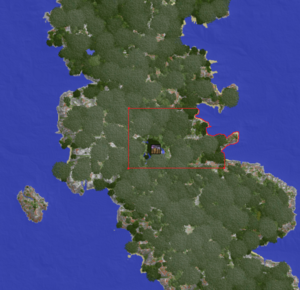 Above ground claim for the nature preserve. The park extends through the entire caves.
Retrieved from "https://civwiki.org/w/index.php?title=Topher_Caves&oldid=38176"
Categories:
Cookies help us deliver our services. By using our services, you agree to our use of cookies.