Civball is a popular art form on multiple Civ servers. Drawing chiefly from the traditions of Polandball art, Civball art consists of (typically) spheroid characters representing Civ nations, alliances, sub-national states, community projects, and any other entities that the artist needs to depict. Drawn in a consistent and minimalistic style, Civball is used for purposes ranging from political cartoons, to depictions of history, to lighthearted jokes.
The subreddit r/Civball describes Civball as "typically manifesting as online comics or single art pieces, where nations/civs are personified as (typically) spherical personas decorated with their nation/civ's flag. Similar to /r/polandball but the name and depicted nations are a variant adapted to the civ genre". 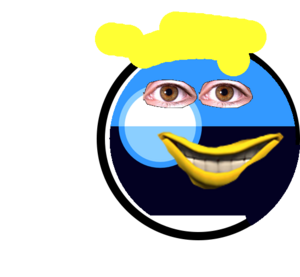 Despite its characteristically simple appearance, Civball art generally follows a set of rigid rules. These are:
- Draw everything by hand, or like it has been drawn by hand. (Eg: no circle tool)
- Be extremely simple. (Eg: no eye pupils)
- Use hard, thick lines to differentiate objects (Eg: no naked flag circles)
- Keep to the style. (Eg: no civhexagons)
- Break these rules when convenient.

Though Civball comics are frequently shared by other means - Discord channels, r/CivClassic, etc - the official home of Civball artwork is the Reddit subreddit r/Civball. Originally owned by inactive moderators from 2014, the subreddit was repossessed by Metriximor on May 4, 2021. Moderated by Metriximor, squareblob, and yodabird19, the subreddit has strong ties to KnotNSA's Civ Art discord, and has played host to a wide variety of Civball comics stretching back the full seven years (up to date as of 2021).

Retrieved from "https://civwiki.org/w/index.php?title=Civball&oldid=45155"
Cookies help us deliver our services. By using our services, you agree to our use of cookies.