Bastion was a large town situated in the tropical climate of the equator on Vintage Civ. It was surrounded by a large andesite wall. There are a handful of buildings and homesteads in the general area around Bastion, most likely due to the base's friendliness towards outsiders. To the north-east of Bastion lie the Tourney Grounds, managed by Invader1337. Between Bastion and the Tourney Grounds, there is a large swimming pool open to the public which was maintained by a Bastion resident. The Temporal Skyway has a Bastion station located just north of the town proper.

Notable features and amenities in and around Bastion include the Cow Wall (relocated from its original positon after the March bombing), the "Big Cot" wall and drawbridge, Cot's Tavern, Bastion Town square and market, the public pool, and the Bastion Communal Kitchen.

The town started with only a few residents, but quite quickly grew in size due to its proximity to spawn and general friendliness to outsiders.

By late February 2022, the town had started minting its own currency, which could be used within the town in various markets as well as Cot's Tavern.

In early March 2022, Bastion and its residents were targeted by ToeSmasher, who after repeated burglaries in the area was shackled and placed in the town dungeon. It was planned to detain ToeSmasher until a trial could be held, however ToeSmasher was able to escape from his cell and shackle before being sentenced supposedly due to Xorberax freeing him during his raid on Bastion. [1]

The town was griefed badly using ore bombs on March 12 2022,[2] by suspected players Xorberax and Toesmasher (Toesmasher was freed by Xorberax [3]) Xorberax says he did it to get the people of Green Spice off his back to stop harassing him. He said afterward he wanted himself to not have gotten caught so the blame would be on Green Spice. [4] The bombing led to the superficial damage of many of Bastion's public spaces, and structural damage to the town warehouse and resident's homes. The bombing almost completely destroyed Toasty's farm (image below), Bastion's primary source of meat and animal products. The farm, losing all but 3 of its livestock, was relocated to the north of Bastion after the bombing incident.

March 14th 2022 marks the unofficial end of the town as a number of citizens left due to the bombing and all internal conflicts caused by it.

Currently March 20 2022, the town has several structures still standing, though somewhat damaged. A few places of the town are far more damaged than others, such as Toastiers house and the kitchen. The commercial part of the town, situated in the center, still has some Trade o' Mats, and some are stocked with items. 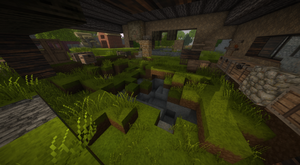 Toastier's house on March 13
Retrieved from "https://civwiki.org/w/index.php?title=Bastion_(Town)&oldid=47770"
Categories:
Cookies help us deliver our services. By using our services, you agree to our use of cookies.