Eddie Murphy, officially the The Eddie Murphy Empire, or the "EM-pire" (most commonly referred to EM) was an empire of smaller states or collectives in the northeast quadrant (+-) of the world. It was named after actor and comedian Eddie Murphy. EM once possessed an active economy and large player base. The defunct nation was succeeded by Anyakova and The Empire. It was one of the founding members of the Defense Union for Mutual Prosperity (DUMP).

The empire officially known as "The Eddie Murphy Empire" was formed on December 9th, 2020, when the HC War concluded with the HC Union's occupation. The constitution was signed by all the states in the greater EM area.

HC joined Civclassic in early September 2020. Oko joined first, soon finding her way to the capital of Varkonia. After inviting some of the HC admins, they congregated to the remote island of modern day Arsenio, which they started to build into a small village. A few weeks after Arsenio was founded, the project was leaked to the rest of HC. HC members flooded the server and greatly sped up the construction of Arsenio, at the cost of ushering in the crime and culture HC is commonly known for.

After the events of the Columbia-Cascadia War, a majority of Murphians left the server or were expatriated. On February 22, 2021, Eddie Murphy dissolved. Its leader, Oko, moved to establish the nation of Anyakova, while Tiddy formed The Empire. [1][2]

The EM government was very decentralized, and was comprised of a collection of small states around the capital region. The ideologies of these states varied, and often contradicted each other. Arguments over nationalization of XP materials spurred the HC War, but its resolution defined the government that the empire had for most of its existence. The general consensus among EM citizens is anti-world police, with Oko going as far to say she'd rather pearl someone herself than let world police pearl in EM.[citation needed]

EM's basic law was unusual due to its tone and structure.

The Economy of EM primarily focused on developing its agricultural and spawner industries, with the vast majority of its income coming from the sale of crops & foodstuffs. Expansions in Monaco were planned to expand in the civil/commercial industries, but these were disrupted by the departure of K0mmi, the leader of Monaco, and the city's subsequent obbybombing. 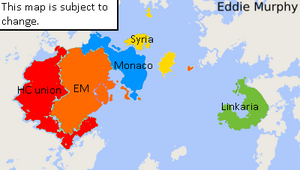 The map of the EM-pire.

The majority of the empire's land was composed of snowy mountains, making it the perfect place to grow potatoes (and only potatoes). With all the mountains around the empire, there was not a lot of optimal land to build infrastructure, and the little land that was flat was usually overpopulated and condensed. States were generally divided as islands, as rivers divide land creating beautiful canyons.

Retrieved from "https://civwiki.org/w/index.php?title=Eddie_Murphy&oldid=32622"
Categories:
Cookies help us deliver our services. By using our services, you agree to our use of cookies.