Breslau is the capital of the Kingdom of Prussia during Civcraft 2.0. It hosted many world sights, such as the Breslau Opera House, where the End of the World speech in 2.0 was made. Like Danzig in Civcraft 1.0, Breslau was named after an actual Prussian city, keeping with tradition.

Unlike many other groups at the beginning of the new world, Prussia decided to take its time with selecting its city location, so the final building site was chosen nearly 6 days after the world began. Like Danzig before it, Breslau is located in the far +,+ quadrant, as to avoid the petty griefers that surround the 0,0 area. The site was chosen on the coast, where one river flows out to the Eastern Sea. This, aided by the tight community and active residents make Breslau a relatively safe city for its citizens.

On November 10, 2013, Breslau went public following the coronation of King Friedrich I.

Many months afterward, King Friedrich fell victim to a tragic skiing accident and passed away without a heir apparent. A Funeral was held on March 29, 2014.

After a brief period of mourning, The dynasty of Ludwig began with the coronation of King Ludwig I on April 12, 2014.

On January 17th, 2016, Breslau was effectively Ground Zero for the immense amount of chaos that ensued following the speech, as well as the demise of King Ludwig I.

Breslau is located on one large and two smaller plains islands. The islands are formed by the forked river Oder that flows through Prussia, and are bordered to the north by the Eastern Sea. Most of the city is located on the central island, while the harbour district is located on the large island. The eastern island is currently unbuilt but is planned to hold the Cathedral District.

The city is unusual for the world of CivCraft, as it is one of the only cities that does not use a grid-based system. There was previously a Google Streetview-style view of the city at http://civcraft.azirale.net/BreslauStreetview/ but is no longer up.

Breslau is known mainly for its uniformity and architecture, and as such has numerous landmarks. If you are planning to visit Breslau, check out the Breslau Tourist Guide with lots of information on Breslau and its surroundings.

This is the main square in Breslau, named for the previous capital of Prussia. Centered in the square used to be the "Rider of Prussia" statue which has since been moved to a new position outside Sankt Sami. It now holds a pillar commemorating the founding of Prussia. In December, the square is covered in snow, and a big Christmas tree is erected.

On the Danziger Platz stands one of Prussia's newest buildings; the Rathaus. Designed by Gotterdammer, Chuckizzle, and Koentinius, the Rathaus is loosely modeled on the town hall in Breslau/modern-day Wrocław. [2] The back porch offers a picturesque environment from which to view the Oder river. The Rathaus also contains the Breslau Ratskeller which can be accessed from the stairway behind the entrance to the Danziger Platz subway station or from the stairway located in the tower of the Rathaus.

The Cathedral (full name: Breslauer Dom) is currently the largest landmark in Breslau, expanding the city to a landmass to the east. It is based on two Churches of the real world, St. Pauls in London and the Berliner Dom.

The home of the Prussian King, this building occupies most of the north of the central district. It is based on plans for the Residenzschloss in Darmstadt.[3] The King resides in an ornate throne room on the north side, and the ministers occupy rooms in the rest of the palace. Luscious gardens are located in the two courtyards of the Palace. 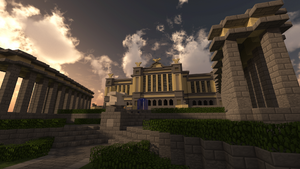 caption=The Opera House and its garden[4]

The jewel in the crown of Prussian Culture. The Opera House, its design based loosely off the Opera Garnier in Paris, is intended to host big shows, such as the Drama Awards. It has a capacity for 100 theatregoers and a big stage. There are 3 viewing levels, of which the upper level is reserved for the King and his Ministers. 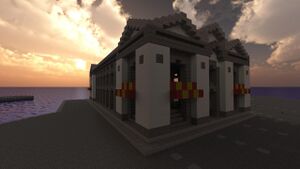 Designed for international trade, the market is located in the harbour to meet anyone traveling by boat. However, because of Prussia's insularity trade is rare and mostly with the state, there is nothing currently for sale in the market.

The Grand Central Station (German: Hauptbahnhof) is located in the Harbour district. From here, it is possible to access the Prussian Subway or the CIC, serving international locations. A link with the Royal Prussian Railroad is present, but closed off to the Public.

Designed by _dbb_ himself, it is the host of many Prussian exhibits. The museum is located East of the Opera House. 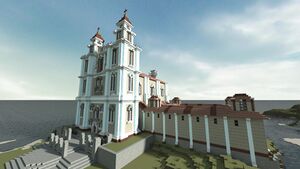 caption=The abbey church and its cloister[6]

Formally named the Church of Saint Walpurga [7] and the attached Breslauer Abbey, it was designed and built by AbbotAlban. While it is not located within the city proper, it falls under the jurisdiction of the city of Breslau.

Following the incredible amount of destruction which took place on January 17th, 2016, much of the city is either under lava, burned away, demolished, blown up, or inhabited by Withers, Guardians, and Magma Cubes. The city is almost, if not entirely, void of players.

Breslau is the residence of multiple companies, such as Baukunst, the Bank of Prussia, Preußische Redstone GmbH, and the Prussian Rail Corporation. 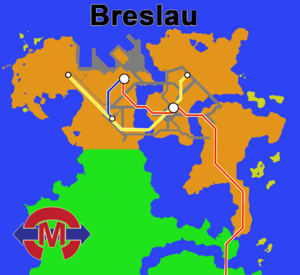 Breslau has a well-developed subway system. It consists of five stations spaced regularly throughout the city, and two-way rails to prevent any collisions. The stations are:

Retrieved from "https://civwiki.org/w/index.php?title=Breslau&oldid=38612"
Categories:
Cookies help us deliver our services. By using our services, you agree to our use of cookies.