Benjaminsburg is a hamlet on Civtest at 900 750. It is directly outside of the walls of Minetown.

Benjaminsburg', named after it's founder Benjamin. 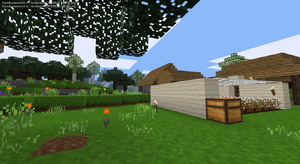 Benjamisburg is located at 900 750, beside Minetown. It was the first settlement built after the Civtest alpha release on the 26th of March.

Benjamisburg is west approximately 50 nodes from the walls of Minetown and built to the side of a small hill with a dungeon within it. A small patch of forestry is behind the one of two small farms fields the hamlet has.

Retrieved from "https://civwiki.org/w/index.php?title=Benjaminsburg&oldid=37856"
Categories:
Cookies help us deliver our services. By using our services, you agree to our use of cookies.