The Atheran Times is an independent international newspaper on CivClassic.
In his article about its re-launch, Editor-in-Chief Vedd states that

The Times serves as a platform for aspiring writers, people who know their way around words and people who see their future in journalism. It is a social platform for the server, documenting the server’s history while it covers new stories and letting people express their thoughts through their essays. Allowing new discussions to start about the topics that matter.

The Times, unlike most Civ newspapers, releases articles immediately and individually, uploading them to an independent website rather than sequential print issues. However, the newspaper originally also started by publishing print editions until it switched to a website after three print editions were published. Its reporters and editors write on a host of topics falling into its six article categories.

The Atheran Times divides its publications into six sections, each section has a different topic.

The Server section consists of news articles concerning developments to the CivClassic server as a whole, such as mechanical or administrative changes, meta discoveries, etc.

The Business section consists of news articles detailing the economy and corporate life of CivClassic.

The Society section is a catch-all section for cultural articles on people- and society-driven work, such as art, player projects, sports events etc.

The Spotlight section produces in-depth articles of people, places, things and puts the spotlight on them.

The Opinion section is a catch-all section for persuasive opinion essays, such as columns, op-eds, and letters to the editor. 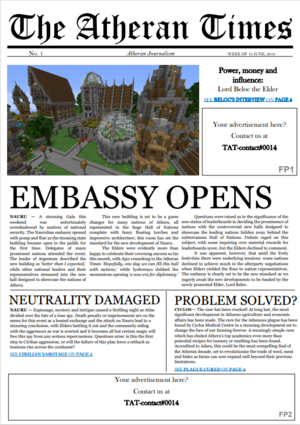 The front page of the first-ever print edition of The Atheran Times.

The Atheran Times began on June 26th, 2019 on a server called AtlasMC (the server on which Cortesia Del Mar played from January to September 2020); it was the passion project of Morvian (Morvia; a country on AtlasMC) Minister of Foreign Affairs Vedd and Morvian Justice Minister tsun123. For its first two issues (released June 10th and July 12th of that year), tsun123 contributed disproportionately, leveraging the inexperienced paper for outreach and power. Following the collapse and subsequent recreation of Morvia the following November, the Atheran Times was restarted on AtlasMC again by Vedd and yodabird19 (whose nations by this point were allies) on June 1st, 2020, and released an issue on June 17th. 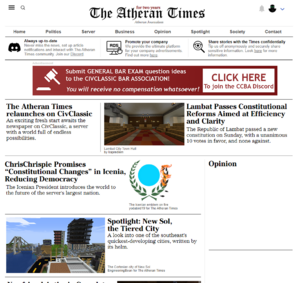 The homepage of The Atheran Times website on the 29th of June, 2021.

On September 6th, 2020, atherantimes.com was launched, and ran until Cortesia Del Mar (of which Vedd was by this point a member) left AtlasMC on October 5th.
The Atheran Times intended to reform on whatever server Cortesia Del Mar settled on from the day that it went into hibernation. Following Cortesia's settlement on CivClassic, serious work began on restarting the site in April 2021; three months later, on June 26th, this work paid off with the relaunch of the Times on CivClassic.

Retrieved from "https://civwiki.org/w/index.php?title=The_Atheran_Times&oldid=37604"
Categories:
Cookies help us deliver our services. By using our services, you agree to our use of cookies.