Pruthenia, officially the Pruthenian Fylkirriche was a sovereign country located within the +,+ quadrant of the map. It was established by Hroerek in late June 2018.

Pruthenia united with The Thalassocracy to form the Kingdom of Vítelia

The name Pruthenia derives from the Latin name for the Old Prussians "Pruteni", the Old Prussians were a Baltic tribe that inhabitied what is now considered East Prussia (part of modern Poland & Russia). The term Fylkirriche is a combination of two separate terms "Fylkir" (A word for leader) and Riche (English cognate to German word 'Reich', near meaning 'realm'). 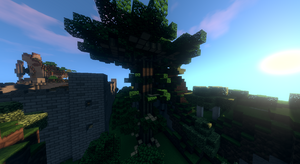 The territory of Fredericksland, is all of the 'ForestHills' biome aside from the limited beach and nearby islets which are 'beach' biome. A particular type of tree, colloquially referred to as "Giant Oak" was considered a national treasure and icon as they are frequent on Fredericksland.

The territory of Roreksland is nearly all a thick roofed forest with a few beaches on the western coast.

The territory of Hel is a reasonably sized nether biome island directly south of Dellingrland.

The territory of Jomsburg Island is a very flat island with rolling plains as far as the eye can see.

Hroerek was of common birth and was never destined to lead a nation and people, it was only forced onto him when his family farm was destroyed by "sea people". Escaping on a boat with 2 other people, his group set sail around the +,+ quadrant to find new land to start fresh. All initial efforts failed as everywhere they went was either claimed, heavily contested or uninhabitable. They were however able to find the island nation of Lasopena completely abandoned as if something bad happened to make the previous settlers suddenly run away from home. It was left in a condition where it was like people were still living there, but nobody was in sight and all was quiet.

In the following days of the re-settlement of Lasopena, Hroerek crowned himself Prince of the new nation of Pruthenia & he appointed a former noble Argead as Chancellor of Pruthenia. Together the first Pruthenian Government with the other settler ratified the Pruthenian Constitution of 2018 declaring Pruthenia a Constitutional Monarchy on the renamed island of Fredericksland. 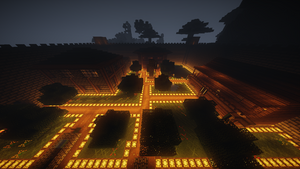 While the now refurbished properties were enough for comfortable living it was clear that better and more spacious living quarters were required if the nation was expected to grow. To provide the level of security and safety required for a prosperous settlement it was determined that the core of the new town would form within a fortified zone. From start to finish the construction of the main fort took over a week and was very strenuous on the already limited resources available to Pruthenia. After construction the city was zoned and the construction of three new buildings began, the palace, the factory and the brewery.

The Kingdom of Jerusalem was found abandoned with it's inhabitants long gone. Prince Hroerek heard of this and then claimed the majority of former Jerusalemite territory as part of Pruthenia. Men were sent to inspect the former Kingdom and they found this was a joint Jewish-Christian-Muslim nation which Hroerek heavily disapproved of, so Hroerek forced through the "Renaming Act" which allowed the government to rename all the former Jerusalemite territories and take down all "heretical symbolism" such as the cult of Kekistan's symbols all over the Kingdom. The Pruthenian Government are hoping for people to come and re-settle the new territories but none have come.

Unification with the Thalassocracy

Following a prolonged period of negotiations and talks with the leadership of the Thalassocracy, it was decided to unite the two realms together, thus Pruthenia has been succeeded by Vítelia.

The Pruthenian Fylkirriche functioned as a Constitutional Monarchy, where power was shared between the Prince and the Chancellor. Section 4 of the Pruthenian Constitution defined this power sharing arrangement as "the Chancellery and the Monarch who share power on behalf of the people of Pruthenia." To assist in administration and decision making within the country the chancellor could form and dismiss a council where they can then appoint ministers; there are no formal ministerial titles along with all political parties being banned.

Fredericksland itself houses a small wheat farm but the main agricultural sector is within outer territories which mass produced, feeding the rest of the nation.

The national drink of Pruthenia, rich apple mead was very easy to make given the resources available on the island and thus became a national phenomenon quickly.

Pruthenia never built any rail connections. One was planned with Provincia but it was abandoned and never completed.

A canal was built with Provincia's approval to make it easier to travel through via boat.

Retrieved from "https://civwiki.org/w/index.php?title=Pruthenia&oldid=42637"
Categories:
Cookies help us deliver our services. By using our services, you agree to our use of cookies.