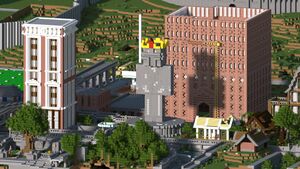 PacStatue in all its glory

The PacStatue is a colossal sculpture built in Mount September. It was dedicated to and built by PacGaming. Originally built as a joke, it eventually became a staple of Septembrian culture, praised by many residents of Mount September.[1]

It is often used as a joke item, for example, “contact your senators and tell them to install a PacStatue in your city”. Often, players “PacGaming” and “Metrimixor” make PacStatue inspired memes as well.

Sometime on the 1st of February, 2021, some unknown benefactor added a crown to PacStatue’s head, resembling a golden ruby-encrusted crown.

After a semi-long hiatus, player ”HenryDraton” returned to try once again to reinstate Mount Augusta, and during his short lived return, Henry visited Mount September, and proceeded to berate and chastize Septembrian officials for “doing everything wrong” and “not focusing on rebuilding MtA”. When Henry eventually came across PacStatue, He became livid and accused MtS(Mount September) for “Honoring Raiders” due to PacGaming’s past actions.[2]

Retrieved from "https://civwiki.org/w/index.php?title=PacStatue&oldid=43304"
Categories:
Cookies help us deliver our services. By using our services, you agree to our use of cookies.