The Grand Duchy of Godhaven is a limited monarchy and a state of the Imperial Federation. Godhaven was founded when its Grand Duke, Thejmqn, led an expedition out to the previously unclaimed territory in the southwest mesa. After the expedition and the claiming of 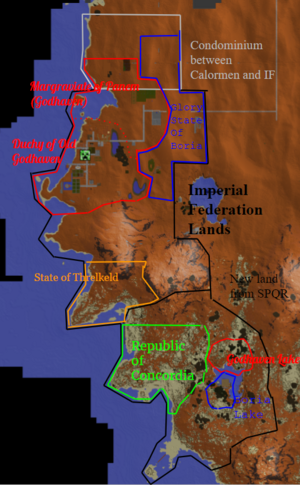 Godhaven's claims within the Imperial Federation are shown in red.

Godhaven is one of few nations that has no restrictions on what or where you can build houses or other structures. As long as your structure does not impede on someone else's build, you can build it. The government of Godhaven aims to be as hands-off as possible. While the state is a monarchy for diplomatic purposes, within Godhaven there are no taxes, build restrictions, or anything that would cause you to not do as you please so long as you are not harming others. Godhaven has written constitution or laws but relies instead on the best law code - common sense. All of Godhaven's public farms and factories are public for all to use (even outside the Imperial Federation) unless it is designated otherwise. Godhaven is divided into currently 3 different monarchies that technically function as seperate states but have the same leader and laws. The Grand Duke of Godhaven is also the Margrave of Panem and the Duke of Old Godhaven automatically.

All are welcome to join and visit Godhaven! This page will be updated with more info soon.

Retrieved from "https://civwiki.org/w/index.php?title=Godhaven&oldid=32290"
Categories:
Cookies help us deliver our services. By using our services, you agree to our use of cookies.