Mithrin was a city-state located in the Grey Mountains 【Thafar'abbad】 in the Northeastern border of the Central Continent. It lies entirely beneath the ground. Mithrin is now known as Annwyn.

After the end of the Somber War when life started to return to the server, the Grey Lady, Nekomant, awakened upon the summit of a lively sunflower highland in the inner +,-. Thereunder she built her first burrow before going on an expedition to the western reaches of the world in search of life. On May 14 2018 she returned to her first laid block and this land she named in the common tongue, Mithrin, the Grey Mountains 【Thafar'abbad】.

In the heart of the mountain the first halls were built and Nekomant became the Lady of her own clan in her great hall. She was joined soon after by gizdecera who died too young and is now remembered only by the stone he worked on. He was followed by OutcastMephisto, who had delved too greedily and too deep in the Lexington Vaults and for that was exiled and hall less. He now labours waiting The Maker's judgement in The Halls of Waiting.

With the completion of the Great Twin Halls 【Nâ'niddîn'dum】 Mithrin began taking shape. However, in light of the few members, the Doors were opened to anyone willing to join the host. On July 1st, 2018 the Kinship of Mithrin was officially stablished and Lady Nekomant took the title of Queen Under the Mountain 【Zabdûna undu ‘Urd】. 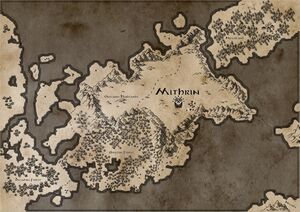 The entirety of Mithrin territory consisted of a large island mass in the +,- quadrant. Despite it's relatively small size Mithrin has great biodiversity, with nearly half of it being a Sunflower Plains, adjacent to a Mesa Plateau, an oak Forest and many sand Beaches.

Grey features predominantely in The Kinship's flag and it represents the land it takes its name from. The crossed stone pickaxes represent humble origins and a reminder that great things can come from the simplest of tools. It contains an adornate Crown made in traditional mithrinish fashion, and represents a Grey Fox, the Queen's personal sigil. Seven stars at it's top represents the Queen and her Council of Six, and the Six Paths no kinsfolk should take:

Retrieved from "https://civwiki.org/w/index.php?title=Mithrin&oldid=39774"
Categories:
Cookies help us deliver our services. By using our services, you agree to our use of cookies.