From CivWiki
(Redirected from CivRealm:Carbon)
Jump to navigation Jump to search 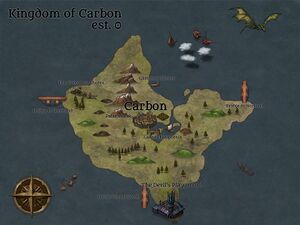 Carbon was originally a city founded during the first iteration of Civcraft. On Civrealms, Carbon sprung up on the launch of the server, settling in isolation on the island to the far northeast to becoming one of the dominant nations. Overtime Carbon has not only become an industrial powerhouse but also an Empire with many vassals with fingers in many different productions in many far off lands. In addition, Carbon maintains the largest vault on the server in the far north named Heaven and more in other locations.

Carbon is one of the oldest surviving nations. In 1.0 Carbon was founded as a Medieval themed city. It was a prospering nation however near the end of 1.0 internal drama and unrest caused many to leave. Although NubSlash the last active Carbonite made it sure Carbon survived onto the next map in 2.0

Carbon dramatically changed in 2.0 adopting a modern look. Owning up to its name the main

Retrieved from "https://civwiki.org/w/index.php?title=Carbon_(CivRealms_2.0)&oldid=36898"
Cookies help us deliver our services. By using our services, you agree to our use of cookies.